This election seems to be our national decision about where we are heading... Freedom and Democracy, or Socialism and Government Rule.  It is hard for me to see my country becoming what it is.  I hoped to be gone when Prophecies became this real.

We see the increasing violence, we see the difference between a godly nation and one that is honoring abortion, euthanasia, mercy killing, addictions, greed, self, and alternative sexuality in children and adults.

Those who hate the boundaries GOD places on our lives, for our own good, will do anything they can to malign the faith of believers.  The theme seems to be force... and the anger keeps rising every year.  In the Bible, there are only two real references to the way the world will be in the End Times... one of them is about Sodom before it was destroyed.

This prophecy is about the sexual appetites of its citizens and the inability of the populations to stop them.  I wouldn't say we are as violent as Sodom yet, but we are heading in that direction.  The attitude of force against anything related to GOD is becoming open and vicious.

I can't imagine living in a place like that... and I have seen inner cities I was afraid of.

Violent control is not always physical.  We have seen how the courts have been used to hurt and destroy Christians.  We see the media used to make everyone afraid to believe what they want to.  We have seen small children used to further the cause of the LGBT community.  We have seen "coalitions" created to prevent the success of any other theology.

I have wondered how many of the gay people I see on TV and in the news became that way by force, by fear, by abuse... thinking there was no other choice.

Only GOD knows the hearts of each of us... whatever our sin may be.  He is the only one who can know how to judge these issues.  I have just tried to understand how to protect myself and my children and my family and my friends and my Christian Community.

How can we approve the purposeful murder of unborn children, simply for the "cause" of making it legal.  I can see how abortion is really a modern form of child sacrifice, how it protects the man who created the child with the mother, and how greed is the reason it is so important for some to protect.

Greed is also behind "mercy killing" - another form of legalized murder.  Euthanasia, volunteer suicide, the high cost of medical services, government health insurance, the war between Democrats and Republicans, the national budget and debt, the breakdown of the family structure - including large distances between family members because of work, education, and other factors, all contribute to the changes in our nation and its values.  Once the government controls health care, it will begin to limit what is approved for payment.  If the government reaches the 100% level in taxation, we will all be employees of the government.  There will be no getting away from the governments ability to decide our entire lives.

America is not ready for this kind of submission.  We don't believe it will ever happen.  We are the frog that is put in the water when it is cool and then boiled without a fight because the heat rises slowly.

I believe this election is the second major turning point in our future history... I believe 9/11 was the first real evidence of GOD removing His protection from our nation.  This is all tied to prophecy.  If Trump wins, it is only four years (we hope) until the next point of decision.  Prophecy will come true, we just don't know how or when.  We see the signs of what GOD warned us about, but only GOD knows all the details of how it will become reality.

I hope and pray that GOD will help us to elect Trump again... just to find more time to fight against the tide of evil that is taking over the world on its way to the Antichrist and the final end of our lives.

What matters most now?

If we can gather together, we can find answers together. 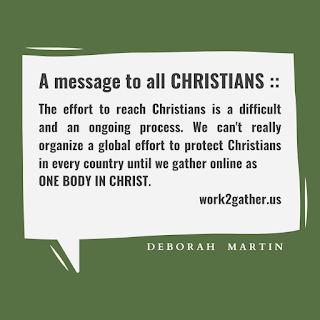 Thank you for your interest in this blog. Your participation in this discussion is welcome, but I would like to ask that you do so with respect toward me and toward the audience that would be reading it.

Please keep your comments focused on the blog entry... using clean language and a respectful tone. If you disagree with something, explain your view without resorting to profanity or abusive statements.

Discussions are important to understanding different viewpoints. I hope you will share yours and allow others the same privilege.

Deborah Martin, Owner
In 1975 I entered the US Welfare system thinking it would help me to provide for my son and myself. I expected to overcome my poverty within two years. In 1987, after years of struggling within a variety of difficult economic situations, I created the foundations of Working Together and registered it as an Oregon corporation. Unable to secure start-up funding, I tried to acquire an educational degree. Various family issues have delayed the start of Working Together, but I am confident God will provide the financial foundations for Working Together at His appointed time. He will finish what He has started. While Working Together may be owned by me on this earth, its true owner is God. I strive to incorporate His Will into its programs.